[Due to the current epidemic, this event has been cancelled].

This debate on equality with Rafe Blaufarb will be dedicated to the presentation of The Great Demarcation. It will take place on March 18th 2020 from 6pm to 7:30pm. The conference will be held in French. 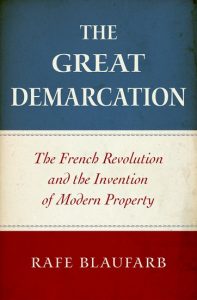 What does it mean to own something? What sorts of things can be owned, and what cannot? How does one relinquish ownership? What are the boundaries between private and public property? Over the course of a decade, the French Revolution grappled with these questions. Punctuated by false starts, contingencies, and unexpected results, this process laid the foundations of the Napoleonic Code and modern notions of property as a result.

As Rafe Blaufarb demonstrates, the French Revolution remade the system of property-holding that had existed in France before 1789. The revolutionary changes aimed at two fundamental goals: the removal of formal public power from the sphere of property and the excision of property from the realm of sovereignty. The revolutionaries accomplished these two aims by abolishing privately-owned forms of power, such as jurisdictional lordship and venal public office, making the state purely sovereign.

As a result, the French Revolution brought about a Great Demarcation: a radical distinction between property and power. From there flowed the critical distinctions between the political and the social, state and society, sovereignty and ownership, the public and private. It destroyed the conceptual basis of the Old Regime, laid the foundation of France’s new constitutional order. It also crystallized modern ways of thinking about polities and societies. In other words, by tracing how the French Revolution created a new legal and institutional reality, The Great Demarcation shows how the revolutionary transformation of Old Regime property helped inaugurate political modernity.

Rafe Blaufarb is the Ben Weider Eminent Scholar Chair and Director of the Institute on Napoleon and the French Revolution at Florida State University.

The debate will take place at the Paris School of Economics : 48 boulevard Jourdan, 75014 Paris

Stay up to date

We use cookies on our website to give you the most relevant experience by remembering your preferences and repeat visits. By clicking “Accept All”, you consent to the use of all the cookies. However, you may visit "Cookie Settings" to provide a controlled consent.
Reject AllCookie SettingsAccept All
Manage consent

This website uses cookies to improve your experience while you navigate through the website. Out of these, the cookies that are categorized as necessary are stored on your browser as they are essential for the working of basic functionalities of the website. We also use third-party cookies that help us analyze and understand how you use this website. These cookies will be stored in your browser only with your consent. You also have the option to opt-out of these cookies. But opting out of some of these cookies may affect your browsing experience.
Necessary Always Enabled

Analytical cookies are used to understand how visitors interact with the website. These cookies help provide information on metrics the number of visitors, bounce rate, traffic source, etc.

Website created in 2021 by the agency Adrenaline, with the collaboration of: