The presentation of “Reclaiming Populism. How Economic Fairness Can Win Back Disenchanted Voters“, by Eric Protzer, will take place on Monday November 8th, 6-7:30 pm (CET). The debate will be held in English. The event is organized in partnership with Harvard University Growth Lab and Polity books publishing house. 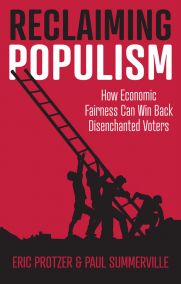 Summary of “Reclaiming Populism. How Economic Fairness Can Win Back Disenchanted Voters”

Populist upheavals like Trump, Brexit, and the Gilets Jaunes happen when the system really is rigged. Citizens the world over are angry not due to income inequality or immigration, but economic unfairness: that opportunity is not equal and reward is not according to contribution.This forensic book draws on original research, cited by the UN and IMF, to demonstrate that illiberal populism strikes hardest when success is influenced by family origins rather than talent and effort. Protzer and Summerville propose a framework of policy inputs that instead support high social mobility, and apply it to diagnose the differing reasons behind economic unfairness in the US, UK, Italy, and France. By striving for a fair, socially-mobile economy, they argue, it is possible to craft a politics that reclaims the reasonable grievances behind populism.

About Eric Protzer and Paul Summerville

🎙 The conference will be held in English

Stay up to date

We use cookies on our website to give you the most relevant experience by remembering your preferences and repeat visits. By clicking “Accept All”, you consent to the use of all the cookies. However, you may visit "Cookie Settings" to provide a controlled consent.
Reject AllCookie SettingsAccept All
Manage consent

This website uses cookies to improve your experience while you navigate through the website. Out of these, the cookies that are categorized as necessary are stored on your browser as they are essential for the working of basic functionalities of the website. We also use third-party cookies that help us analyze and understand how you use this website. These cookies will be stored in your browser only with your consent. You also have the option to opt-out of these cookies. But opting out of some of these cookies may affect your browsing experience.
Necessary Always Enabled
Necessary cookies are absolutely essential for the website to function properly. These cookies ensure basic functionalities and security features of the website, anonymously.
Analytics
Analytical cookies are used to understand how visitors interact with the website. These cookies help provide information on metrics the number of visitors, bounce rate, traffic source, etc.
SAVE & ACCEPT

Website created in 2021 by the agency Adrenaline, with the collaboration of: